We would like to say a huge thank you to everyone who donated money to the Chandra Ban Earthquake Fund. We raised an impressive total of £755, which has already been put to good use supporting and helping those people whose houses and livelihoods have been shattered. Please below for a series of updates and photographs.

Having given out 10,000 Nrs (around USD 100) to 38 neighbouring households whose houses were badly damaged/ destroyed by the Earthquake, we moved into the next phase.

We gave each staff member Nrs. 50,000 about US $500 plus about 50$ worth of generic medicines and requested an account when they returned. Sabina has not yet returned and Fursang will leave when she returns. These account, I think, give a good idea of what is happening in the villages in Nepal.

Everyone is sleeping outside in makeshift tents or under old corrugated iron sheets.

Two people died in the village: one 10 year old child and one old woman.

Many livestock were killed and Mira's family lost 5 goats.

There are 3 new houses made of cement belonging to Brahmin/Chhetri (high castes) which were undamaged.

Mira's family consists of mother and father-in-law, brother and sister-in-law. Their 2 nieces were killed in a terrible accident last month. Mira's husband is working in the Middle East and Mira considers her in-laws her family.

Their house was made of stone and mud and was completely destroyed but they plan to re-build it.

Mira gave the medicines to her relatives, who (hopefully) will share this around the village to those in need.

The water supply is from the same source as before the Earthquake but it is dirty due to the landslides, so they are filtering it with a piece of cotton.

Money arrived from the Government, or rather from the Maoist party, (3 lakh, about 3,000 US $) and was distributed mostly to their supporters.

Some foreigners arrived bringing foodstuff like rice and lentils.

Mira shared the money between her father-in-law, brother-in-law, other relatives and neighbours (especially 2 very poor households) to assist them immediately for food and temporary shelter materials.

Arrive by road nr. Gumdel (possible in this season before the Monsoon), walk about 1 hour to village.

All houses were damaged in the Great Earthquake on 25th April: about half considered “A” damage which is the highest level – they were condemned and luckily the Government told the inhabitants not to stay in the houses as many already damaged houses came down on 12th May, the 2nd large Earthquake. It was a beautiful traditional village (Ward 8) and all houses were made from mud brick. All the villagers have been sleeping outside since 25th April.

The Government provided 200 tarpaulins for the 600 households plus about 100 blankets of bad quality  to be shared out, plus some rice and oil. Each Ward was given a share and Ward 8 decided how to distribute the provisions amongst themselves, deciding to give more to the very poorest households.

All livestock survived. The electricity returned to the village on 11th May. The two schools, a Government one and one sponsored by some Germans were both damaged and cannot be used. There is a Red Cross Tent.

Kamal shared the NRs. 50,000 (US $500) and medicines between his family, neighbours and the poorest households. The remaining medicines he gave to a dentist who has some knowledge of medicine. We organized tarpaulin for his family and again, the most disadvantaged families. They will all, most probably, continue sleeping outside, in animal shelters and/or under tarpaulin throughout the Monsoon and until they can re-build their houses.

Hari’s immediate family is in Kathmandu and his home is in the Terai, which was not badly hit by the Earthquake,so he used the money to help his sister. She lives with her family in one of the most badly effected regions.

Lamasangu is reachable by road, although there are constant landslides in the area and they have to be cleared when they block the road. It is the main and only motorable road to the Tibetan border. (All the Chinese goods come in from this road).

It is a large village, spread around a 3 kilometer radius. All the stone houses are destroyed and most of the cement houses are badly damaged. Everyone is sleeping in tents, under corrugated iron or tarpaulin. It is chaos!

Many of the villages above the road have faired even worse and anyone left in the villages is scared of the frequent landslides and rock falls. Hari Dai slept there one night and said the earth continued to vibrate throughout the night and every hour or so, there were load bangs, like a bomb, as further landslide occurred. His sister said that they are used to it by now.

Assistance came from various Aid groups and Gov. representatives but there is uneven, unfair, disorganized distribution and completely insufficient for the number of homeless people in need of shelter, food and basic supplies. Politics is the order of the day, with the cadres of the political parties giving to their important supporters, and making promises of more help tomorrow, tomorrow, tomorrow.

Hari Dai, distributed the money (Nrs. 50,000) to his sister, her daughter and granddaughter and some of the most needy neighbours.

Migma took a bus to Shyaphru and then walked for 3-4 hours to his village. A road is under construction towards his village but it is not usable at the moment.

About 30 traditional houses, made of stone, all collapsed during the Great Earthquake. 3 houses with a stone base and 2 higher floors made of wood survived more or less intact.

No one died, but many were injured and a few cows died.

Migma gave the basic medicines to a small health post in another Ward of his village. They were grateful for these simple supplies – there are 2 Nepali doctors there.

The Government has sent in supplies of rice, salt, sugar and basic foodstuffs by helicopter. Eg. about 1.5 kg of rice per household, so not much.

A foreign helicopter also landed close by and took away the injured to a temporary medical facility near the airport of Kathmandu, where they were treated for free and fed.

Migma’s and his daughter’s houses both collapsed so Migma used some of the money to pay the locals to help build a shed, in order to keep their belongings safe. He used materials from the two collapsed houses. He also gave some money to other relatives in the village and kept some to support the newly arrived relatives who will stay with him in Kathmandu.

Almost all the villagers have moved out of Dulup to relatives’ houses in the Capital or elsewhere and will probably remain there until the end of the Monsoon.

Our neighbours, whose houses have been damaged, have already received NRs 10,000 from the Chandra Ban Earthquake Fund, so he will use the 50,000 Nrs to repair his house. The extended family, of 10 members, live in an old house, which has collapsed and a tiny newer house which was damaged in the second quake on May 12th. His father has some part-time work, otherwise he is the only member of the family working.

On the map, this looks the closest to Kathmandu, but Sabina has to cross town, then take a bus, going South, until the road finishes at Chhapeli and then walk for 4 hours. Chhapeli is the nearest market to her village. During the Monsoon, it is almost impossible to reach the village. 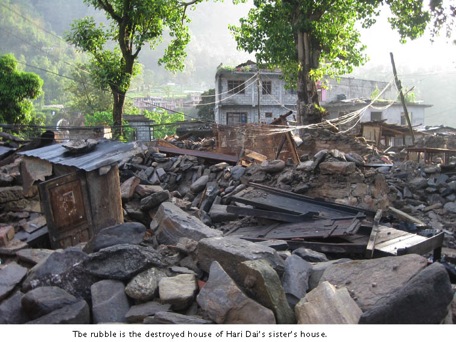 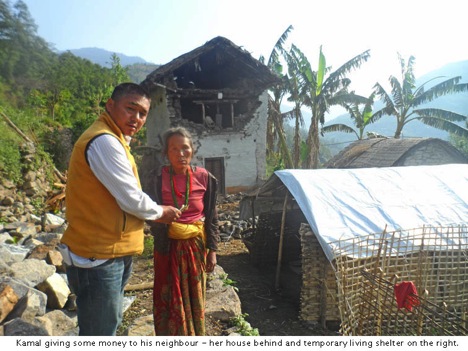 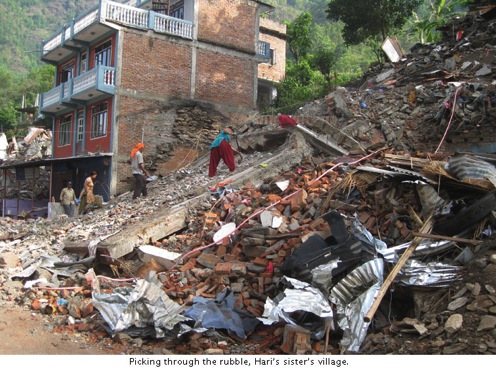